The First And Final Record Of Life

A record is a written account of an event to preserve evidence so that it can be remembered throughout the generations.

With the invention of writing the recording of history was possible.

Other benefits of writing

When there is a significant event in the life of a person he usually makes a written record of it.

Similarly, God makes a record of important events in the lives of His people.

Throughout the Old Testament period, the Lord bore record by requesting that an altar be built when He visited His servants.

After the flood, Noah built an altar of sacrifice to God.

The aroma of the burnt offering pleased the Lord and He promised that He would never curse the ground again for man’s sake and neither would He smite every living thing on the earth (See Genesis 8:20-22).

The Lord told Abraham to leave his family and homeland and go to an unknown country and settled.

Abraham’s obedience resulted in tremendous blessings to him and his descendants.

Upon arrival in this strange land, the Lord visited Abraham and promised him that He would give his seed the land.

Thus, Abraham built an altar at the place of visitation as a record of God’s promise (See Genesis 12:1-7).

The Lord also visited Isaac, Abraham’s son, in Beersheba to reinforce the promise that He made to his father.

The altar of God promotes blessings

The Lord told Moses at mount Sinai that he should make an altar of earth or from the soil and sacrifice sheep, oxen as burnt and peace offering to Him. 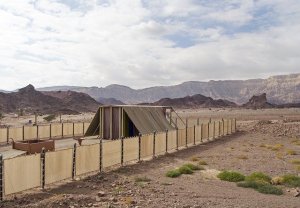 Every place that God records His name He will visit and bless him. (See Exodus 20:24).

This was the law of the altar which God still honors today.

The altar symbolized the highest worship to God where He recorded His name and gave blessings.

The Lord came down on Mount Sinai and called Moses up to Him where He gave him his commandments, statutes, and judgments to give to the people.

Moes recorded every word from the Lord and sealed it with an altar as a memorial. (see Exodus 19-24:1-4)

The Lord placed His name on these altars as a memorial to all generations (See Exodus 3:15).

In other words, the Lord’s covenant of blessings will pass down from generation to generation.

These covenants that God made are also passed down to this present generation through the Lord Jesus Christ.

He sealed it with His blood on the cross that lifted the curse of sin and made us partakers of the heavenly blessings.

A record of this new covenant is made in heaven.

For there are three that bear record in heaven, the Father, the Word, and the Holy Ghost: and these three are one. (John 1:5-7)

The final altar was the cross where the death and resurrection of the Lord Jesus Christ recorded the promise of eternal life to us if we only believe.

The blessings of this final altar is reinforced through prayer and partaking of the holy communion.

Thank God for the first and final written record.

Writing Tips
benefits of writing, holy communion, The blessings of the altar, The final record, The record of life, Writing Tips