Was There a Crucifixion and a Resurrection? Part Two 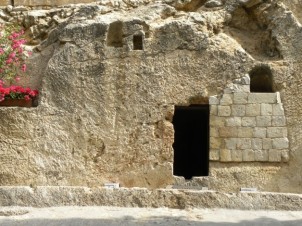 How high and Mighty is your Tower? It will come down

This post is a continuation of Part one – Was there really a crucifixion and resurrection?

We will continue to examine how God dealt with sin in the Old Testament.

Noah cursed the descendants of Ham because of Ham’s disrespectfulness to his father (Genesis 9: 18- 28). One particular descendant of Ham was Nimrod who was a mighty hunter on earth, and the beginning of his kingdom was Babel (Genesis 10:6-10).

After the flood, every human on the earth spoke one language, and they moved together from place to place on the earth. They finally settled in a particular area and decided that they would make clay bricks to build a city and a tower with a peak that would reach up to heaven. The purpose of the city was to establish their name so that they would not be separated on earth. (Genesis 11:1-9).

Tower of Babel by Pieter Bruegel the Elder (1563). Image courtesy of wikipedia.org

I often wondered what was so special about this tower that would capture the attention of God. The bible stated that the Lord came down to earth to personally examine their city and tower.

This tower was clearly different from one of our skyscrapers that existed in our society. Some of these buildings are extremely high, but God is clearly not disturbed by them. It would appear therefore that the tower of Babel was not a tall building it was something else.

If it were a very tall building made of brick God would just destroy it with a mighty puff of wind or earthquake instead of leaving His throne in heaven to examine this tower on earth.

It is my personal belief that men had once more gained knowledge of evil, and this tower represented their headquarters where they practiced witchcraft and sorcery.

They had maybe devised a method through witchcraft and magic that they hope would transport them to heaven in the event of another worldwide catastrophe.

Hence, it was imperative that they remained together in one place and remained united. Speaking the same language would also ensure that their knowledge was transferred from one generation to the next.

The entire human race was united together with the same evil intention.

The Lord knew the evil intent of their hearts and decided to put a stop to it. In keeping with His covenant that He would not destroy the entire earth by flood, the Lord decided to allow their fears to come to pass.

As a result, they could not understand each other, and they were divided and scattered across the face of the earth.

They could no longer pass on their knowledge to each other, so the city with its mysterious tower remained unfinished. They called that place Babel which means confusion.

One method of destroying the plans of the enemy is to create confusion in their camp.

How are the mighty fallen? The inequity of men will be punished.

Another occasion in which God intervened as a result of man’s extreme iniquity was the destruction of Sodom and Gomorrah. The Lord destroyed that city with fire saving only Lot for Abraham’s sake (Genesis 19). 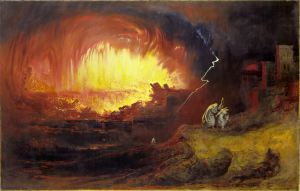 The Destruction of Sodom and Gomorrah, John Martin, 1852. Image courtesy of wikipedia.org

The sins of men continued to increase, and so God decided to select a righteous man to develop a nation from his seed. The Lord wants a nation that would diligently serve Him and be an example to other nations. The Lord chose Abraham and blessed him because of his obedience.

The nation of Israel was developed from Abraham’s seed, but they were by no means obedient to God. When their sins became extreme, it released God’s wrath upon them in the form of fire, pestilence, and destruction by their enemies.

The rise and fall of the children of Israel and their experiences are examples that demonstrated God’s mercy and His intolerance of evil.

Christ’s main purpose to earth was to sacrifice His life for the sins of the entire earth. The sins that we inherit at birth and those that we accumulate throughout our lives.

It is as a result of the death and resurrection of Christ that all the nations of the world still exist.

You might be wondering how I can prove this. I will continue by analyzing our present society and see if the sins of men have lessened after the birth of Christ. Unfortunately, the sins of men increased rather than decreased.

Some of the magnitude of men’s sins can be seen in slavery, holocaust, the so-called ‘ethnic cleansing’ that occurred in many countries, civil wars, world war, increased in terrorism.

The entire world contained all manner of evil practices in the form of witchcraft, sexual immorality, crime, violence, murder, anger, pride and the list continues.

There are many cities in this world whose sins are worst than Sodom and Gomorrah. The blood of the innocents is crying up to God from the earth. So why is God not answering their call?

I can clearly recall that in Genesis 4, God immediately intervened when an innocent man was killed by his brother and his blood cried out to God from the dust of the earth.

So why isn’t God’s anger kindled against the sins of men in our world? Why isn’t God pouring out His wrath like consuming fire on some of these cities or countries that are riddled with sins? Why doesn’t the Lord poured out His wrath on the terrorists who are heartlessly beheading His people?

Does God cared about the sins of men? Has He given up on us?

The answers to these questions and more will be revealed in Part three of this post.