When It Is Okay To Be Poor! 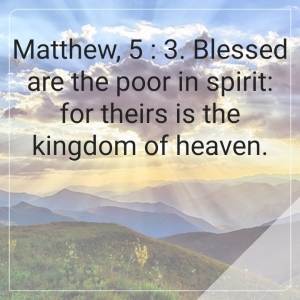 The kingdom of God is not meat and drink, but righteousness, peace and joy in the Holy Ghost (Romans 14:17)

There are different schools of thought about this.

Some people believe that they are the same while others believe that the kindom of heaven refers to the millenial kingdom when Christ returns while the other is universal.

The kingdom of heaven is recorded only in the book of Matthew and not in any of the other gosples.

Jesus told the rich young ruler who wanted eternal life to sell all his possessions and give to the poor.

However, the rich man refused and went away sadly.

Jesus, then stated that it is hard for the rich to enter the kingdom of heaven.

He further stated that it is easier for a camel to go through the eye of a needle than for a rich man to enter into the kingdom of God. (See Matthew 19: 16-24).

Jesus used both terms interchangeable and so we can assume that both are similar.

The kingdom of God includes the kingdom in heaven plus the Church on earth who is the body of Christ.

Thus, Jesus stated that when we pray we should pray that God’s kingdom in heaven come down to earth and His will be done in our lives on earth as in heaven.

It is the Holy Spirit in our hearts that will manifest the kingdom of God on earth.

The poor in spirit will inherit the kingdom of God.

The poor in spirit refers to those who hunger and thirst for righteousness.

It is not a physical poverty, but refers to those who are humble and meek in spirit; those who are not entangled with the wealth of this world like the rich young ruler, that will prevent them from entering the kingdom of God.

I pray that your spirit will become poor so that you will yearn for righteousness, peace and joy that will make you rich in the kingdom of God.

Have a blessed day!

Join 12,638 other followers
Follow Becoming the Oil and the Wine on WordPress.com