Tropical storm Dorian, changed direction Tuesday night and headed in a more northerly direction where it past closer to the Virgin Islands.

We were unprepared for this turn of event since we thought that we would not have received a direct hit.

Anyway, Wednesday morning, the governor of the BVI issued a warning for everyone to stay indoors and all buisness places were closed except essential services.

Yesterday, we had rain and wind begining at about 1pm. It lasted until 7pm in the night.

There were some landslides on the hills, minor flooding, but no major damages were reported. This morning we were back at work as all buisness places were opened.

Dorian is now heading towards Florida with a wind speed of 60mph and storm force wind extending 60 miles outward from the center according to the National Hurricane Center (NHC).

The NHC also stated that the storm will upgrade to a category 2 hurricane before it reaches Florida.

According to the NHC, a category 2 hurricane can cause major damages to buildings, shallow rooted trees will be uprooted and there will be powerloss.

As expected, the residents of Florida are vigorously preparing for the impact of this storm.

Please pray for the residents of Florida that God will shield them from this storm.

Thank you for your prayers for us in the caribbean. God has been good to us.

Let us continue to keep each other in prayer as we ride out the storms of life. 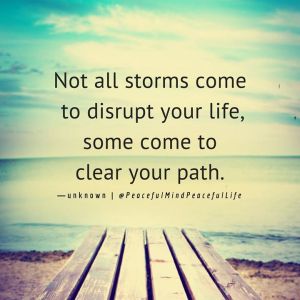 Then they cry unto the Lord in their trouble, and He bringeth them out of their distresses. He maketh the storm a calm, so that the waves thereof are still. (Psalms 107:28-29)