Whose Approval Do you Want? 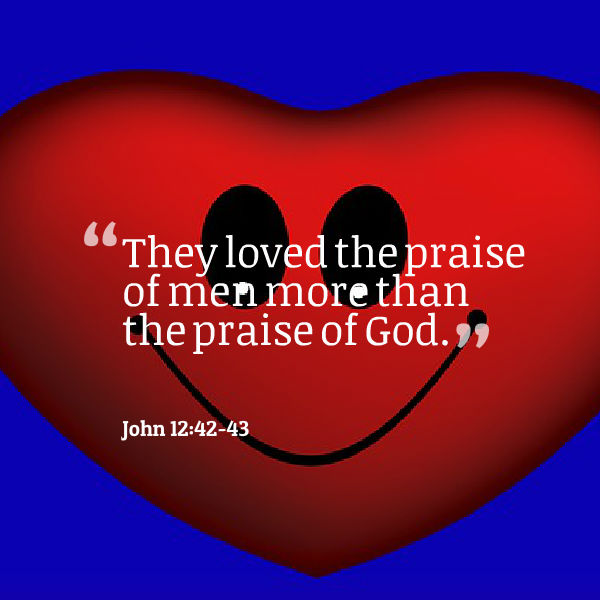 Whose approval do you want? Men or God?

Some people live a pretentious lifestyle because they crave the approval of men.

They are people-pleasers even to the extent of destroying their emotional wellbeing.

However, God wants you to please Him and not men. He wants you to live according the purpose that He has ordained for you.

Your purpose will not be pleasing to everyone but as long as you walk in integrity and obedience to God the Lord will honor your work.

Nevertheless, even among the rulers many believed in Him, but because of the Pharisees they did not confess Him, lest they should be put out of the synagogue; for they loved the praise of men more than the praise of God. (John 12:42-43 NKJV)

When you live to please God the heavens will be opened to you. You will see visions and have dreams of your future.

God will also open your eyes to the revelation of His Word.

Now it came to pass in the thirtieth year, in the fourth month, on the fifth day of the month, as I was among the captives by the River Chebar, that the heavens were opened, and I saw visions of God. (Ezekiel 1:1 NKJV)

Therefore, stick close to the Lord and give Him your best.

Whatever is in your hands use it for the Lord because everything else will fade away but only what is done for Christ will last.

Whatever your hand finds to do, do it with your might; for there is no work or device or knowledge or wisdom in the grave where you are going. (Proverbs 9:10 NKJV)

Living your best life on earth is one which glorify God. It is not a life with riches and fame.

It is a life where you crucify or deny the flesh and allow the Spirit of God to reign supreme in your life.

The moment that your flesh dies you will see the Lord high and lifted up in all His glory.

And like Isaiah, you will cry, “Holy, holy is the Lord God almighty.” Amen!

When you have an encounter with God you will never be the same again. Praise the Lord!

The enemy will try to sow seeds of doubt and fear but rebuke the negative thoughts and allow the Lord to do a marvelous work in your life. Amen!

Therefore, the Lord said: “Inasmuch as these people draw near with their mouths and honor Me with their lips, but have removed their hearts far from Me, and their fear toward Me is taught by the commandment of men. Therefore, behold, I will again do a marvelous work among this people, a marvelous work and a wonder; for the wisdom of their wise men shall perish, and the understanding of their prudent men shall be hidden.” (Isaiah 29:13-14 NKJV)

Who do you please?

Living Victoriously
christianity, daily thanksgiving devotion, How to learn to please God, Living your best life, Only what is done for Christ will last