The Lord has placed a burning desire in my heart to write about some of the negative spirits that are invading the body of Christ – the Church.

There are a large number of these evil spirits, but the Lord wants me to focus on those that have become a stumbling block to the unbelievers. Exactly what do I mean by stumbling block?

Have you ever invited a friend to your church but after you identified your church they immediately decline your offer on the basis that too many hypocrites are in your church?

This scenario happened to me sometimes, so I have decided not to invite anyone to church, but instead, I encourage them to have a relationship with God.

Another scenario is that the person may accept your invitation to attend church and even appeared to enjoy the service. However, on your way home, you extend the invitation again but your friend quickly declined.

Of course, you cannot understand why she would refuse because she had accepted the invitation to the altar and you thought that she had genuinely given her heart to the Lord. You became concerned and insisted on receiving an answer.

After much persuasion, your friend finally confided to you that the choir leader or a prominent member of your church was her supervisor at work, and she was a Jezebel.

Therefore, since she was forced to deal with her at work, she had no intention of associating with her at church also.

After all, the church should be a place of refuge and not bondage. Your friend is perfectly correct because the same evil spirits that are operating in the workplace should not be present in the church.

God is not pleased with the Church. He is almost ready to spit us out and start afresh. If it were not for the blood of Jesus Christ, we would be doom.

However, judgment is awaiting some people if they refuse to repent and recommit their lives to God. 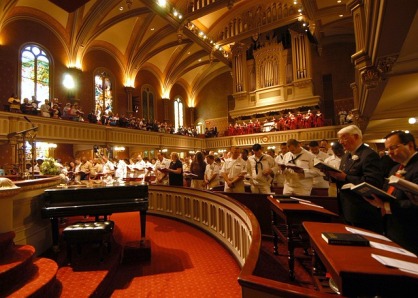 In 2011 when I recommitted my entire life to God, He opened my eyes to the spiritual realm so that I could see the spirits of individuals around me at the workplace and in the Church (the body of Christ).

The Lord showed me the dead spirits, the Jezebel, Balaam and religious spirits that have invaded the lives of many people.

I was in shock when the Lord revealed to me the individuals who possess the religious spirit.

It is very prevalent! For fourteen years I lived with a spouse who unfortunately possessed this spirit, so it was easy for me to identify its characteristics.

Features of the religious spirit

The persons who are possessed by the religious spirit all exhibit similar traits.

They are always hiding behind an instrument or an object while the service is in progress. I believe that this prevents them from actually hearing the Word of God that will pierce and divide their souls, spirits, joints, and marrow, and discern their thoughts and intents of the heart (Hebrews 4:12).

Hence, those who possess the religious spirit never see themselves as guilty of anything and in their mind, the Word of God is always directed to others and not themselves. They can operate in this manner for many, many years without changing. What will change their life? You may wonder.

“But woe to you, scribes and Pharisees, hypocrites! For you shut up the kingdom of heaven against men; for you neither go in yourselves nor do you allow those who are entering to go in.

“Woe to you, scribes and Pharisees, hypocrites! For you devour widows’ houses, and for a pretense make long prayers. Therefore, you will receive the greater condemnation.

“Woe to you, scribes and Pharisees, hypocrites! For you travel land and sea to win one proselyte (disciple), and when he is won, you make him twice as much a son of hell as yourselves.

“Woe to you, scribes and Pharisees, hypocrites! For you pay tithe of mint and anise and cummin and have neglected the weightier matters of the law: justice and mercy and faith. These you ought to have done, without leaving the others undone. Blind guides, who strain out a gnat and swallow a camel!

“Woe to you, scribes and Pharisees, hypocrites! For you are like whitewashed tombs which indeed appear beautiful outwardly, but inside are full of dead men’s bones and all uncleanness. Even so you also outwardly appear righteous to men, but inside you are full of hypocrisy and lawlessness.

“Woe to you, scribes and Pharisees, hypocrites! Because you build the tombs of the prophets and adorn the monuments of the righteous, and say, ‘If we had lived in the days of our fathers, we would not have been partakers with them in the blood of the prophets.’ (Matthew 24: 13-30)

When you read the above words of Christ, replace Scribes and Pharisees with “religious spirit.” It is imperative that this evil spirit is not ignored because it is very dangerous.

The religious spirit also operates in the lives of radical religious terrorists.

I implore you, my fellow brethren and believers in Christ to let us examine our hearts and be truthful to ourselves.

If anyone is found wanting or lacking, repent and allow the Lord to cleanse you and start afresh.

If you refuse, unfortunately for you the word of the Lord says,

“Behold, I am against you,” says the Lord of hosts;

“I will lift your skirts over your face,

I will show the nations your nakedness,

And the kingdoms your shame.

I will cast abominable filth upon you,

I pray that we will eradicate this deadly spirits from our lives so that we can dwell together in love and unity.

Share with us your thoughts on the religious spirit.