If Jesus was on earth today how would He deal with the social injustices in our society?

Would He be one of the great civil rights leaders to organize marches to demand freedom and justice?

At our church’s Saturday morning devotion on Zoom, we looked at Matthew 14:22-36. This passage relates the incident when Jesus walked on the water.

The scripture highlights the importance of having faith in God in the midst of a storm or crisis.

When we keep our eyes on Jesus the turbulent waves cannot overcome us.

The storm on the sea of Galilee by Rembrandt – 1632

When Jesus is in your boat all the storms in your life will be calm.

But as I read through the entire chapter I was amazed to see how it speaks to what is happening right now in the USA.

We are all aware of the racial uprising that is taking place in the USA.

The racial tension was always present in the USA and in other countries, but it became magnified after the world watched the brutal murder of a helpless black man by a white policeman.

The man was crying out for help, but his life was mercilessly snuffed out.

The incident was videotaped and broadcasted on the media for the world to see.

When I saw the horrific incident I knew immediately that this was a setup.

For we wrestle not against flesh and blood, but against principalities, against powers, against the rulers of the darkness of this world, against spiritual wickedness in high places. (Ephesians 6:12)

There was a deeper underlying evil agenda of the enemy to instigate a civil war in the USA, which would further destabilize the economy and possibly spread to the entire world just as the COVID-19 pandemic has spread to the world.

The incident generated different reactions from many people around the world.

Most people have shown their distaste against racial discrimination and police brutality by demonstrating in peaceful protests across the nations.

Others are voicing their sorrow and outrage on the various media platforms while others who are part of the government and judicial system are working hard to change laws and put in place policies to remove racial injustices and provide equality for all people.

Many people are also praying.

Some people may want to disregard prayer saying that they are tired of praying and it is time to take up arms and go out on the street.

But will the violence change anything?

If you should round up all the wicked people in the world, and God forbid, kill them all or lock them in prison and throw away the keys, will this stop discrimination and other forms of evil?

Unfortunately, it will not!

You can kill the flesh, but you cannot kill the bad spirits.

After the flesh died the evil spirits will find another person to infiltrate and continue their wickedness.

I am not bashing the peaceful protests because they also serve a vital role and we can see the effects of the freedom fighters and civil rights movements throughout history.

Read also: Black and white! Will there ever be any shades of grey?

The news media showed how the peaceful demonstrations in several cities were hijacked by various factions and groups with evil agenda. 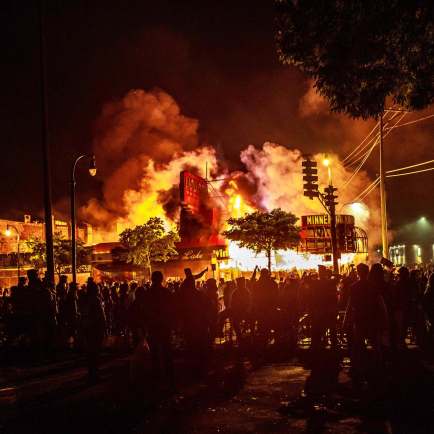 A police station and nearby businesses were set ablaze on Thursday, the third night of protests in Minneapolis.Credit…Kerem Yucel/Agence France-Presse — Getty Images. NY Times

The governor of Minnesota was forced to call in the National Guards to try to control the violence that had broken out in the city.

He stated that the situation in Minneapolis was no longer about the murder of George Floyd but was about attacking civil society, instilling fear, and disrupting the cities (NY Times.com).

Note that he stated, “instilling fear.”

The primary motive of the enemy is to create fear in the hearts of people by generating chaos, confusion, and violence.

This was a similar situation during the COVID-19 pandemic crisis.

The true intentions of the people’s protest for justice for George Floyd’s death appeared lost in the violent uprising.

Is there a better way to deal with injustices in society?

Let us look at how Jesus would react in these situations of blatant injustices.

In the first part of chapter 14 of Matthew, we saw how John the Baptist was viciously beheaded by king Herod to please the daughter of his evil unlawful wife, Herodias.

John The Baptist was a powerful prophet of God who the people loved and revered (Matthew 21:25-26).

He prepared the way for the Messiah by proclaiming that the kingdom of God was at hand and everyone needed to repent.

John also spoke against injustices and immorality within the government and for those reasons, he was violently murdered.

Knowing how Peter was quick to pull out His sword to defend Jesus at the time of His arrest, I am sure that he wanted to do the same when he heard of John’s death.

Jesus along with Peter and the other disciples could have formed an army of violent protestors to instigate an insurrection against the government.

Jesus could have summoned battalions of angels to fight against the Roman empire and re-establish the Jewish kingdom.

For as the heavens are higher than the earth, so are my ways higher than your ways, and my thoughts than your thoughts. (Isaiah 55:9)

But Jesus does not react similarly to men. His thoughts and ways are higher than ours.

The vicious murder of John the Baptist, an innocent man, was a blatant attack against the Kingdom of God.

Jesus said that the Kingdom of God suffers violence, and the violent takes it by force (Matthew 11:12).

Jesus demonstrated to us His “violent” way of ensuring that the wicked did not and will never ever be able to capture or conquer the Kingdom of God.

Although Jesus was in deep distress about the horrific situation, He calmly instructed His disciples to collect the body of their beloved prophet and bury him peacefully.

Then He tried to escape to the wilderness where He could be alone, but the multitude of people followed Him.

I believe that the people followed Jesus at the time not just to receive miracles or to hear His teachings, but perhaps hoping that He would formulate a plan of attack against the oppressive regime.

The Bible states that when Jesus saw the multitude of people He was moved with compassion.

Whatever the reasons that the people followed Jesus into  the wilderness, He only saw and recognized their needs.

The people needed the Good Shepherd to lead them beside still waters.

They needed the Good Shepherd to protect them against the evil forces of the enemy.

They needed the Good Shepherd to restore their souls and lead them on the path of righteousness.

The people needed the Good Shepherd to feed them with the living bread from heaven and anoint them with oil of gladness.

But when He saw the multitudes, He was moved with compassion on them, because they fainted, and were scattered abroad, as sheep having no shepherd. (Matthew 9:36)

So Jesus catered to their needs by healing them of their diseases and feeding them with spiritual and physical food.

Then Jesus escaped into the mountains away from the multitude, away from His disciples to pray.

The Lord Jesus Christ wanted to wage war with the spiritual forces of evil and the best way to do this is through deep prayer and intercession.

So Jesus prayed through the three watches of the night, which began at 6pm, and on the fourth watch He got up from His knees triumphantly to walk victoriously on the water.

This was a walk of victory!

Jesus conquered the forces of evil in the spiritual realm through prayer.

He conquered fear, pride, anger, murder, deception, racial and other forms of discrimination, social unrest and injustices, and even death.

Then He arose victoriously to thread upon the enemy.

The Lord Jesus Christ passed on this victory to all of us at the fourth watch of the night.

He wants us to receive this victory by keeping our eyes fixed on Him in spite of the turmoil around us.

The Lord wants us to invite Him into the boat with us so that He can calm the storms that rise up in our lives.

Never underestimate the power of prayer because this is the weapon that we have to use in these trying times to conquer the forces of evil in the spiritual realm.

May God have mercy upon us that we will follow the example of Jesus to walk in victory at the fourth watch of the night.

A lesson on Freedom

I have a dream #MLK;  If I had just sneezed #MLK

Thank you for reading, but before you leave, share with us your thoughts on how Jesus would react to injustices.