Many of you are aware of the devastation that Irma and Maria, both category five hurricanes, have brought to some of our Caribbean islands.

The hurricanes brought severe destruction to most of the small islands that were unfortunate to be in their direct paths. These islands include Antigua and Barbuda, St Martin, the Virgin Islands (St Thomas, St John St Croix, and the BVI), Puerto Rico, St Kitts and Nevis, Anguilla, Turks and Caicos.

I am seeing the pictures of the devastation on the other islands for the first time because for the past three months I have been busy trying to cope with the turmoil that these hurricanes have caused in my life.

Immediately after Irma tore through the islands, there was intense silent across the island of Tortola where I reside, as we stared in disbelief at the extreme damage. The mountainside, yards, parks, and streets were littered with metal zincs, boards, battered vehicles, boats, broken glasses, and garbage. After the silence, there was a sense of panic that even though we survived the hurricane, diseases would break out to wipe us out.

The widespread devastation released intense fear. Fear of starvation, homelessness, and unemployment. Consequently, some unscrupulous individuals looted supermarkets, clothing stores, and other shops. The smaller shops were gutted so, the larger supermarkets closed their doors and only allowed a few people at a time to shop. As a result, there were long lines at the supermarkets as people began to ‘panic shop’ thinking that there would be a food shortage.

There were also long lines at the gas stations to get fuel, and even when the government announced on the radio that there would not be a shortage of oil or food because shipments were coming into the island, people were still panicking refusing to believe.

Many people packed their belongings and rushed to the airport to catch a plane ride home while many countries sent private jets for their people. I decided that I will not run but stay to face my dilemma. We are living in the last days and so the likelihood of disasters can happen anywhere.

The aftermath of hurricane Irma brought fear and confusion, which intensified one week later when Hurricane Maria partially struck us with lots of wind and rain. It lasted for twelve frustrating hours.

How much can we bear? We have sinned Lord, and we repent! Many people who have never prayed before found themselves crying out to God.

We were without light and water for weeks. We returned to the days of our forefathers where we have to carry water in buckets from the river except that the BVI don’t have rivers, so we got water from our cisterns.

When I observed the chaos on the island, I heard the voices of the government trying to calm and reassure the people, but I did not hear the voice of the Church.

The Church was silent at a time when we should be in the forefront. After all, afflictions are no stranger to us. The Bible tells us that we will have trials and tribulations in this world. Therefore, when it happens on a wide scale, we are to take the lead to help and comfort the helpless.

Instead, the Church said, “I told you so! Because we have sinned and refused to repent the Lord has sent the hurricanes to destroy us.”

Whether or not there is any truth in this statement, we need to understand that when afflictions are upon us, it is not the time to preach to the victims. It is time to be like the good Samaritan and pour in the oil and wine. I believe the Church missed a great opportunity to demonstrate the characteristics of Christ.

Three months after Irma and Maria, we are still feeling the aftermath. The thieves are still stealing, and the oppressors are still oppressing.

Two months after Irma. Our streets are cleaned and the debris removed. Thanks to the hard work of the government and people.

Due to a shortage of apartments, many of them were damaged plus an increase in the number of tenants without a home, the landlords have raised their rents astronomically.

I have been forced to rent an apartment that I cannot afford, and thus I am living above my means.

My mother taught me not to put my basket too high so that I would need a stick to take it down. However, now I am forced to break one of her rules because my basket is too high and so I am now scrambling for a stick to reach it.

The hurricane affected the rich and the poor, the good and bad. But right now, only the poor and the good are suffering. May God intervene and have mercy on us.

Yes, I have learned some valuable lessons from Irma, and I am still learning.

In every storm, there is a calm, and I have found the peace that calms my heart and gives me full assurance that God is in the midst of the situation and He will take care of His own. 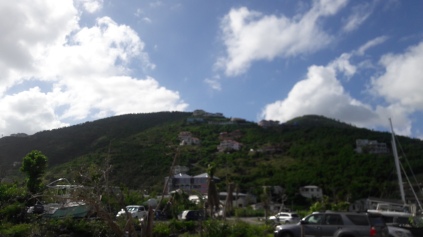 Today (December 8, 2017) is a beautiful and calm day on the island of Tortola.