Speak, Lord, For I Am Ready To Listen

Are you ready to listen when the Lord is about to speak to you?

Praying is a form of communication.

You begin by pouring out your needs to God and then you finish your prayer with a resounding AMEN.

But, is this the end of the communication?

After you speak to God, you need to remain at the altar for a response from Him.

However, the Lord will not speak to you if your heart is not set in the right place.

Let us take a look at an example in the Bible.

Samuel was chosen by God to be a prophet. If you are not familiar with the story of his mother, Hannah, you can read 1 Samuel 1-3.

Hannah fulfilled her promise to God by taking her young son to the temple of God to be trained by Eli the priest.

And she said, Oh my lord, as thy soul liveth, my lord, I am the woman that stood by thee here, praying unto the Lord.

For this child I prayed; and the Lord hath given me my petition which I asked of him: Therefore also I have lent him to the Lord; as long as he liveth he shall be lent to the Lord. And he worshipped the Lord there. (1 Samuel 1:26-28)

Eli was getting old and his two sons who had taken over the priestly functions in the temple were evil.

The Bible described them as sons of Belial who knew not the Lord (See 1 Samuel 2:12).

Note that, although the sons of Eli were priests who offerred up sacrifices to God, they did not know the Lord because their hearts were evil.

One wonders who they were offering up these sacrifices to.

As you can see, it is not impossible to have pastors and ministers in church praying, preaching and worshipping without knowing the true and living God.

Having a form of godliness but denying its power. And from such people turn away! (2 Timothy 3:5)

They have a form of godliness because they have the intellectual ability to practice a message to preach every Sunday in the pulpit, but they deny the truth and do not know the way of the Lord.

Thus, their prayers and worship are in vain because God do not hear or honor their performances.

The sheep suffers who are under the care of pastors who have a form of godliness because their prayers are hindered.

The sons of Samuel descecrated the sacrifices of God and so the presence of the Lord was no longer in the temple.

Since the Lord withdrew His presence from the temple, He no longer speak to His people.

Hence, a famine was in the land for the Word of God.

However, young Samuel was very keen to learn the ways of the Lord and to know the work of the temple.

So while Eli’s wicked sons abhorred the offering of the Lord, young Samuel ministered before the Lord, being a child, girded with a linen ephod. (1 Samuel 2: 18)

Only the priests were allowed to wear a linen ephod.

Thus, the child Samuel knew his calling from an early age and accepted it.

Moreover, Hannah made a coat for her son and brought it to him every year when she came to the temple.

Samuel’s parents loved him dearly even though he did not grow up with them.

Yet Samuel remained in humble obedience worshipping God in the temple.

God saw the purity of the child’s heart and decided to visit him.

One night Samuel was awaken from his sleep by a voice calling his name.

Samuel did not know the voice of God so he went to Eli thinking he was called by Eli.

But, Eli did not call the child and sent him back to bed.

But on the third time, Eli realised that God was calling the child so he told him to answer saying, “Speak, Lord  for thy servant heareth.” (1 Samuel 3:9).

Samuel learned the ways of the Lord while working in the temple, but he did not yet know the Lord and the Word of the Lord was not yet revealed to him.

That night, the Lord appeared physically to Samuel.

Samuel was ready to receive the revelation of the Word of God because his heart was prepared and in the right place to receive it.

Thus, when Samuel heard the coice of God calling his name, he boldly answered,

God spoke to the child Samuel personally face to face just as He did with Moses. 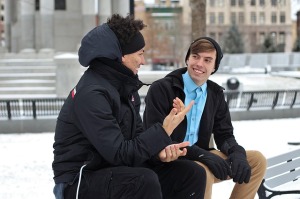 The Lord spoke to Moses face to face, as a man speaks to his friend. (Exodus 33:11A)

The Lord revealed to the young boy a disturbing prophetic message of what would become of Eli and his sons.

The Lord had already given a prophetic judgment against the house of Eli by a man of God and so He was confirming His Word to young Samuel.

“And, therefore, I have sworn unto the house of Eli, that the iniquity of Eli’s house shall not be purged with sacrifice nor offering for ever.” Said the Lord. (1 Samuel 3:14)

How can such a young child bore the burden of such a harsh judgment?

It was not surprising that the following morning Samuel was terrified to share the vision with Eli.

He somberly went about his business in the temple without saying a word to Eli.

Samuel’s action prove to us the humility of his heart.

The young boy knew he was next in line for the priesthood so he could have rushed to the old man to brag about his new appointmet.

However, Samuel did not!

It was only when Eli gently encouraged him to share the Word of God with him that Samuel did so.

Samuel walked straight into his destiny from he was a child without setting one foot in the wilderness because his heart was set in the right place to begin his destiny.

Is your heart set in the right place to receive the revelation of the Word of God?

When the Lord calls your name, are you ready to answer,

“Speak, Lord, for your servant hears”

Join us tomorrow morning for a continuation when we look at the call of Joseph and compared his immediate reaction to his calling to that of Samuel.