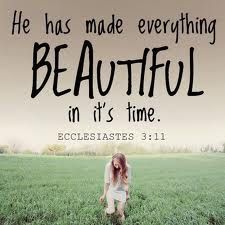 In the Old Testament period special tunics were made for the priest for glory and for beauty.

These tunics were a intricately crafted by gifted Artisan who were filled with the wisdom of God.

The tunics were skillfully woven with gold, blue, purple and scarlet thread and fine linen.

Precious stones were also embedded on the shoulders of the ephod that was over the robe. The stones were engraved with the names of the twelve sons of Israel.

Thus, the priest bore the names of the children of Israel on his shoulders as a memorial before the Lord.

This beautiful garment of the priest was considered holy and could only be worn by the sanctified priest chosen by God.

Now, we have a high priest who was made lower that the angels when He suffured at the cross but was crowned with glory and honor.

Hence, as partakers of this heavenly blessings, we also are made beautiful not by our outward adornment but by the glory of the Lord Jesus Christ who dwells in our heart.

In that day the Lord of hosts will be for a crown of glory and a diadem of beauty to the remnant of His people. (Isaiah 28:5)

I know that whatever God does, it shall be forever. Nothing can be added to it, and nothing taken from it. God does it, that men should fear before Him. (Ecclesiastes 3:14)

Your beauty is everlasting.