No Devil Can Stand In The Presence Of God

It is a known fact that wherever the presence of the Lord is, demons must bow! Our bodies are the temple of the living God. Wherever we go, we take Him with us.

Therefore, there is no need for us to call down the Lord from His throne in heaven to earth. We do not have to usher in His presence inside the church building because He is already present in our hearts.

Do you not know that your body is the temple of the Holy Spirit who is in you? (1 Corinthians 6:19)

When the Lord lives in your heart you will live a life of the high moral character, you will be compassionate to others, you will be your brother’s keeper. The glory of the Lord will radiate from your being. Wherever you go, the favor of God will follow you and His blessings will be in the place.

People who fear the Lord will be attracted to your presence. Individuals who are convicted of their sins and want to change their lives will gravitate towards you for counsel and advice. However, the hypocrites, backbiters, covetous and deceivers will hate and persecute you for no apparent reason. Why?

Because when they stand in your presence, the demons inside their heart must bow to the Holy Spirit within you. This will make them uncomfortable because the presence of the Lord will break off their heads that are filled violence and trouble and shatter their hands that shed innocent blood rendering them naked and ashamed. 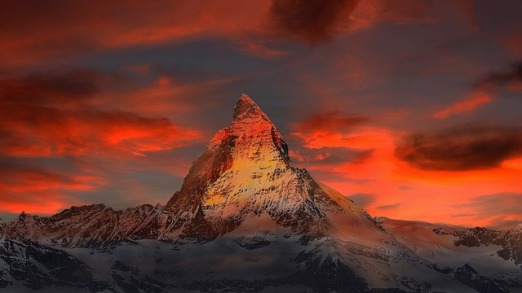 The mountains melt like wax at the presence of the Lord (Psalms 97:5)

You will heap coals of fire upon their heads (Romans 12:20).  No wonder they do not like you!

And when they arose early the next morning, there was Dagon, fallen on its face to the ground before the ark of the Lord. The head of Dagon and both the palms of its hands were broken off on the threshold; only Dagon’s torso was left of it (1 Samuel 5:4).

The philistine, the enemy of Israel, stole the Ark of the Covenant and brought it to their country and placed it in the temple of their god Dagon. The next morning when they awoke they found the statue fallen flat on its face in front of the Ark.

The people lifted up Dagon back on its feet but the next morning Dagon was not only on its face in front of the Ark, but its head was broken off, and both hands shattered leaving its torso. The priest and worshippers of this idol became afraid and would not return to the temple.

A depiction of the destruction of Dagon by Philip James de Loutherbourg, 1793. Image courtesy of wikipedia.org

The Lord was not finished with these idolatrous people because He struck them heavily with tumors and other pestilences. Any city they sent the Ark, the Lord attacked them viciously until finally they had the good sense to return the Ark to its right dwelling place (I Samuel 5-6).

So they sent and gathered together all the lords of the Philistines, and said, “Send away the ark of the God of Israel, and let it go back to its own place so that it does not kill us and our people.” For there was a deadly destruction throughout all the city; the hand of God was very heavy there. And the men who did not die were stricken with the tumors, and the cry of the city went up to heaven. (1 Samuel 5:11-12)

When God has a hold on your life, do not try to return to sin or follow the footsteps of the unrighteous people. The Lord is a jealous God, and He will not allow His glory to be shared. So His hands will be against you, and anywhere you go destruction will follow you until you return to your rightful place in God.

Join 12,665 other followers
Follow Becoming the Oil and the Wine on WordPress.com