Death, Where Is Your Sting?

The sting of death is sin, and the strength of sin is the law.

All of us at some point in our life time have been stung by the venom of death.

The excruciating pain that we felt when someone we love passed away is called the sting of death.

The word sting is defined by dictionary.com as a prick or wound with a sharp-point or from a venom-bearing organ.

It is a sharp biting pain that wrapped around your heart like a tight band. This is the penalty of sin.

As long as we live in this world that Satan rules there will be sin. There will be injustices, greed, opression, crime, violence, and death is a certainty.

Sometimes we become sad and depressed when we hear the horrific news on the airways. We wondered when will it end. When will the Lord return for His people.

I don’t want to sound like a dooms day prophet, but as bad as it is now it will become worst as time goes on.

But, there is hope!

The hope of the cross!

When the Israelites were stung by the venomous snakes in the wilderness they looked up at the slain body of a serpent nailed to a cross and they lived.

The Israelites’ hope was in the cross that bore the penalty of their disobedience and rebellion.

Similarly, our hope is in the slain Lamb – Jesus Christ – who bore the shame, humiliation, agony and the death of sin for us.

Our supreme victory is that Christ conquered death and removed the sting of death.

Oh death, where is your sting?

Oh grave, where is your victory?

The snares of death cannot entrap us.

The sorrows of hell cannot terrorise us.

Oh death, there is an antidote for your sting.

It is the cross of Calvary.

Hallelujah! What a Saviour!

Death cannot separate us from the love of God because absent from the body is present with the Lord.

So when this corruptible has put on in corruption, and this mortal has put on immortality, then shall be brought to pass the saying that is written: “Death is swallowed up in victory.” “O Death, where is your sting? O Hades, where is your victory?”

The sting of death is sin, and the strength of sin is the law.  But thanks be to God, who gives us the victory through our Lord Jesus Christ. Therefore, my beloved brethren, be steadfast, immovable, always abounding in the work of the Lord, knowing that your labor is not in vain in the Lord. (1 Corinthians 15: 54- 58). 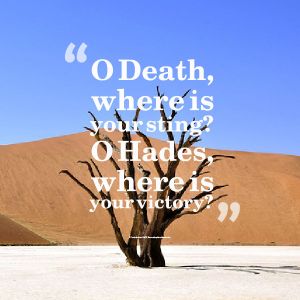