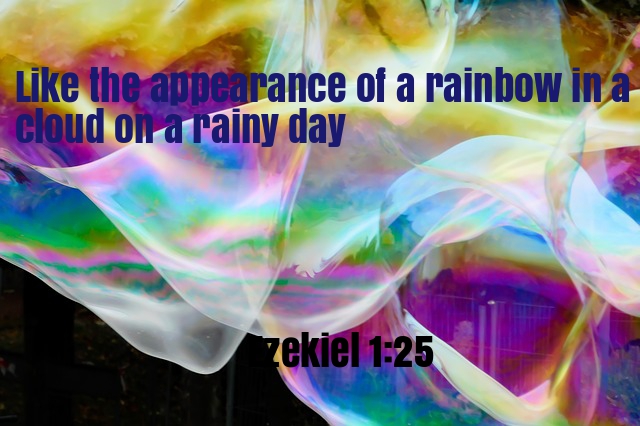 Ezekiel described the appearance of God as a rainbow on a cloudy day.

In the Bible, the rainbow is a reminder of God’s covenant with humanity.

And I will remember My covenant which is between Me and you and every living creature of all flesh; the waters shall never again become a flood to destroy all flesh. (Genesis 9:15)

The rainbow signifies the glory of the Lord.

The rainbow portrays the beauty and radiance of the throne of God.

And He who sat there was like a jasper and a sardius stone in appearance; and there was a rainbow around the throne, in appearance like an emerald. (Revelation 4:3)

The rainbow signifies the completion of God’s mighty work for humanity at the end of this age.

But in the days of the sounding of the seventh angel, when he is about to sound, the mystery of God would be finished, as He declared to His servants the prophets. (Revelation 10:7)

The appearance of God is like a rainbow on a cloudy day – a fresh start of hope and possibilities.

Since we are made in the image and likeness of God then our demeanor and personality should depict the appearance of God.

Let us become the rainbow that God created us to be!

Join 12,637 other followers
Follow Becoming the Oil and the Wine on WordPress.com